Karate, as an oriental single combat, began to develop in Latvia in 1977 in two clubs Dynamo (police club) and ASC (army sports club). Over the course of several years, the rapid development of this sport began and by 1980 more than 3000 people over 14 years old were engaged in karate. In those days, the competition rules were very similar to those of J.K.A. (Japan Karate Association).

In 1984, after some tragic events, a ban on karate followed, and only in 1991, with the collapse of the USSR, this ban was lifted.

The beginning of our organization can be considered 1993, when the “SHINRI” club was organized and officially registered.

In the same year the club joined the Latvian Shotokan Academy headed by the president of the organization Leonid Vasiliev, where we got acquainted with the Shotokan Karate-Do style.

From the very beginning, participating in international competitions, club members and athletes have established themselves at the highest level. In 1995, at a tournament in Germany, we met J.G. Knobel sensei from Holland (today – 9 dan J.K.A.). He gave another strong impetus to the development of karate both in our organization and in Latvia as a whole.

Finally, in 2001, the J.K.A. Federation was formed. Latvia. In 2004, the federation joined the international karate-do organization – SKDUN (Shotokan Karate Do of United Nations – www.skdun.org), headed by its president Aurel Patru. Having shown itself as a strong organization, already in 2006 in Latvia in our hometown of Jelgava, the J.K.A. Latvia organized and hosted the World Karate Championship – 14 SKDUN Gichin Funakoshi World Shotokan Karate Championship.

Currently the Federation has branches in cities and regions such as Riga, Jelgava, Olaine, Bauska, Iecava, Dobele, Daugavpils, Ozolnieki , Kekava, Marupe and others. Today, more than 300 athletes of all ages are engaged in our organization.

In its current form, karate is less than 200 years old however it has roots that date back thousands of years.

The art originated on the island of Okinawa and in its early form was heavily influenced by ancient Chinese martial arts, collectively known as kung fu.

The Beginnings of Karate History on Okinawa 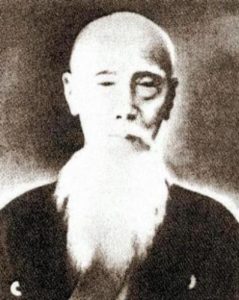 The history of Okinawan Karate can be traced back to the late 17th century when a ban on weapons was imposed by the samurai rulers of Japan.

The exact evolution of karate history is lost due to the lack of information being written down which is unsurprising when taking into account the strict rules against subjects of the island learning martial arts.

This meant that all training by early masters such as Kanga Tode Sakugawa (pictured) and Sokon ‘Bushi’ Matsumura, had to be done in secret and as weapons could not be carried on the island, self-defence tended to revolve around empty handed techniques.

The earliest surviving written evidence of karate in Okinawa was a mention of the word Tode (the Okinawan name for the art) in the late 1700s. It was in reference to a visitor to the island from China named Kushanku who taught a form of kung fu and may have introduced the first version of the Shotokan kata kanku dai. Tode style blended with the martial arts already being cultivated on the island which was known as Te, meaning ‘hand’. 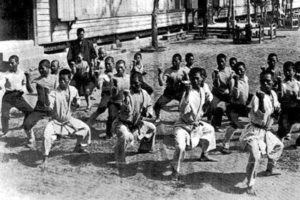 Te was popular in three cities in particular, Shuri, Naha and Tamarai. Each city had its own way of doing the martial arts and modern day styles reflect this; Shotokan and Shito-Ryu are mostly influenced by the style from the city of Shuri, that is Shuri-te, and to a lesser extent Tamarai-te. Goju-ryu on the other hand is more influenced by Naha-te.